We have a new kitten – Coco Coleman has joined our family…….and it is like she has always been with us. She is now 5 months old and going through her ‘childhood’. (plenty of pics below).

It has been around five years since Tsar moved onto the litter box in the sky, and I have missed having a furry friend. I was positive that if Anthony didn’t get me a kitten for my 50th, then it was never going to happen……but one day earlier this year, I was gobsmacked when Anthony said we could talk about it.

I know yes, I could have easily ignored Anthony’s feelings about not getting a new kitten, as he had said it took years to finally get Tsar’s ginger fur off his clothes……..but I wouldn’t do that…..I wanted him to want a new kitten too. 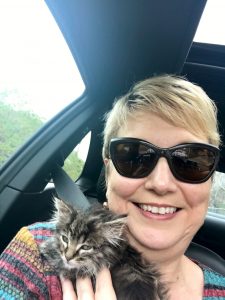 I waited until we returned from overseas, as didn’t want to leave her for weeks – sad for her and me, and then started looking on Gumtree and rescue sites seriously. I had several ‘let downs’ on Gumtree – timing or just too much interest meant I lucked out. BUT it was meant to be with Coco – this lady posted a photo of 5 cuties, and Coco was the prettiest – she was centre of the photo, a mottled grey and a girl – winning. A few messages back and forth one evening to the lady and I asked if possible could she hold her for me, and I would come out around lunchtime the following day. This was around 9pm at night and I never heard back from her – so the next morning I was already resigned to having missed out. But when I called her, she said ‘yes you wanted the girl tabby – she was the most popular, but I have told people she had sold’ – I nearly cried on the spot. I couldn’t concentrate at work, so left mid-morning, to pick her up. Coco (it took a few days to name her) climbed onto my shoulder, snuggled into my neck straight away and stayed that way shivering the whole car ride home – it was love at first sight for sure – she was 8 weeks old.

Getting ready for arrival –

So in prep of getting a kitten – yes just like bringing a baby home – I had to ‘cat proof’ the place. We had ‘paw proof’ screen doors put on the balconies, and now that she is here I am also having screens put in the windows, as she is a jumper and likes to look out the windows. I don’t want any chance of her falling out of the apartment – it’s not like we’re on the ground.

I have certainly spent more on Coco than an animal before but look at that face – Petbarn is a favourite store for sure. She has ‘kitten’ food – dry and wet sachets – I have gone with a mix from Petbarn but also Coles – so that I can afford to feed her for the next 20 years lol. She has some ‘treats’ but she mainly plays with them – we are trying to get her to associate the treat container rattling with meal times. Sometimes it works – other times no – so basically she’s a cat 😊

She has an igloo shaped soft bed, which initially we draped a towel over and I gave her a toy bear – so that she would feel safe and secure after having been with her four siblings. The bear looks a bit chewed on, so think she sleeps in there – but she does also like to climb on top of it.

Big W also had a flurry high sided bed on sale one day – Coco loves it – it’s actually that soft and fluffy that she kneads and suckles at it still, before climbing into it. However it does a little hot lately – she she’ll have a nap, then climb out to cool off on the tiles, then climb back in and nap again.

Well she certainly has plenty of toys. As a small kitten her favourite toy was the mouse on the spring, but think she is too big for it now – mousey used to get such a pounding. The other favourite, and still is, is pink fluffy – $2 from a cheapy store – she carries it around in her mouth – she jumps up into her ‘cat cave’ with it – it’s certainly funny watching her walk around holding the pink fur……with the long plastic stick part trailing along behind her. She has a tunnel – that makes a crinkling noise when she runs through it – and she does that a lot, I mean a lot.

Christmas gifts were a plush hedgehog and a long crocodile – certainly hedgy is more popular due to the size and she can hold onto it (and kick it), – poor croc doesn’t get much attention.

But the other favourite toys, without spending any money, are pegs, plastic tops off containers, jellybeans, paper, leaves – or even imaginary items are fun to ‘play with’.

She was litter trained when she joined our family, and we have only had a few minor issues. She started with a cheap basic litter tray, with a lightweight wood pulp type litter, as we wanted it flushable……but it stuck to her paws and she walked it everywhere. 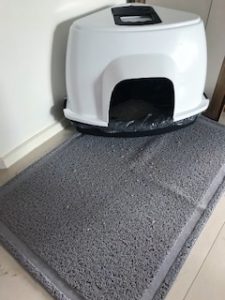 I have now upgraded to an enclosed litter box, a rough mat, and pallet style litter, which seems to reduce the amount of ‘spreadage’. The only ‘accidents’ we have had seem to be – 1. When I put the plastic door/flap on the new litter box too early and she just didn’t know what to do with it, how it all worked, and 2. Occasionally she will wee on the bag of litter right next to the litter box, however we have moved the litter box into the bathroom and no issues since, so don’t know what she was trying to tell us there.

Anthony is very keen on ‘walking the cat’ – maybe it’s more that he wants to see me walk the cat – looking like the crazy cat lady. So Coco has a harness and she is fine with it now……but she does realise that when it goes on, she is going outside – at this stage its only onto the balcony, but her grass is on the balcony – and that’s all she wants anyway. One of these days we will take her out into the back yard of the building and let her actually walk on grass.

Her first month or so with us, she was just so cute, all of the time – she wanted lap time and was just beautiful……..but then she grew older and now has a nickname of ‘bitey bitch’……but also still ‘my beautiful girl’. First up of a morning she is psycho – just wants to bite and play rough on the bed – have learnt to play with a toy, coat hanger, or just ignore her and she settles down. Then usually through the day, and again in the evening she has another ‘session’ – where she just runs – don’t try and pick her up, as you will get bitten. But then half hour later she’s tired, and napping and so placid and beautiful again, keen for a pick up and pat.

She has tried jumping onto the dining room table and kitchen bench – but mainly when there is something new on there – we have several water bottles and water pistols laying around the place – the quick spray certainly calms her down.

If we are in our bedroom, then she is allowed too, so favourite spot would be on our bed, or behind the curtains – she loves looking out at everything going on outside. If we are home then she is allowed out in the living / kitchen area, and has two favourite spots, being under the dining room table – again she can survey the world, but best place ever is her ‘cat cave’, as seen in photo. She has always loved this – even though when super little she had to stretch and really scramble to get up there, whereas now she likes to come running out of her room, through the lounge and leaps into the space. I think because it surrounds her, she’s up high, but also can see up, she loves it, and she can’t damage it, so all good.

I cannot imagine not having Coco in our lives now and I have pretty much stopped calling her Tsar, as she is so different in personality to our past boy.